Here is quick look at an elusive cryptid, the Chupacabra.
The Chupacabra or Chupacabras (Spanish pronunciation: from chupar "to suck" and cabra "goat", literally "goat sucker") is a legendary cryptid rumored to inhabit parts of the Americas. It is associated more recently with sightings of an allegedly unknown animal in Puerto Rico (where these sightings were first reported), Mexico, and the US, especially in the later's Latin American communities. The name comes from the animal's reported habit of attacking and drinking the blood of livestock, especially goats. 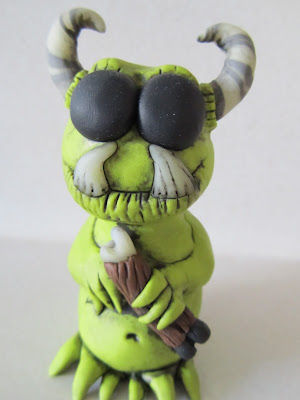 Awww! He doesn't look very scary or intimidating.
But then again, I'm not a goat. 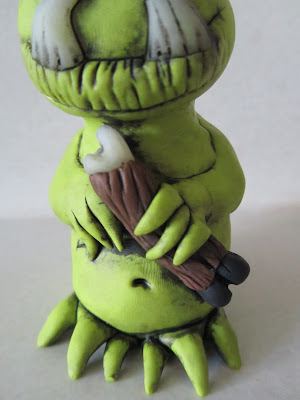 He even brings his own snacks. 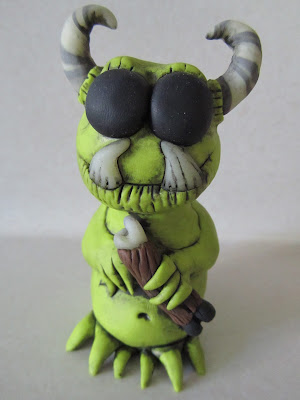 I fashioned him out of polymer clay. The eyes were supposed to appear
large and able to see well in the dark. My Chupa is little light sensitive, and
could probably benefit from corrective lenses.
His horns (and tail) glow in the dark and aid in his hunting of goats.
Ack! Those eyes are killing me! Wish I had gone a different route, but I can just
blame it on interpretation.
Join us this week for our "Creepy Cryptids" challenge.
We have a great sponsor and a fabulous prize for the chosen
Gruesome Twosomes this week! Check out this post for more info.   ﻿
Posted by Creepy Glowbugg at 4:01 AM

How cute is that! YOu rocked that little chupa!

I love his eyes. They do need to be big to see those darn goats. Great Job!!!

ROFL This is so cool, Glo. Love it.

What a fantastic creation Vee xx