Macabre Monday HDH147 - Who are you calling a Succubus?!

*Please see the sidebar for HDH Macabre Monday Rules*
(Note: entries not following the guidelines are not eligible for prizes or badges)

Okay, macabre fans... your challenge this week:
HDH147
"Who are you callin' a Succubus?!"

You are to create a dark, Gothic, or Halloween-based art piece
that depicts a Succubus in one form or another.
Just what is a Succubus you may ask?
In folklore traced back to medieval legend, a succubus (plural succubi) is a female demon or supernatural being appearing in dreams, who takes the form of a human woman in order to seduce men, usually through sexual intercourse. The male counterpart is the incubus. Religious traditions hold that repeated intercourse with a succubus may result in the deterioration of health or even death.
In modern fictional representations, a succubus may or may not appear in dreams and is often depicted as a highly attractive seductress or enchantress; whereas, in the past, succubi were generally depicted as frightening and demonic.
Now ya know!

We are sponsored this week by

Kenny K has generously offered up 2 digis of choice to each
of the chosen Gruesome Twosome.

Now it's time to check out what the Minions have created this week
using Kenny K images.
August guest DT
Stampin' Angel Jenn 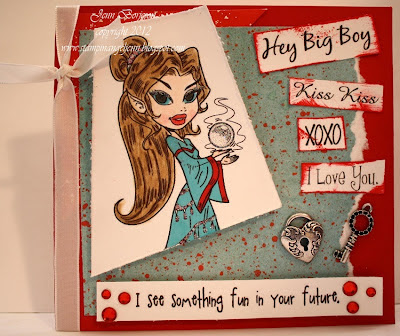 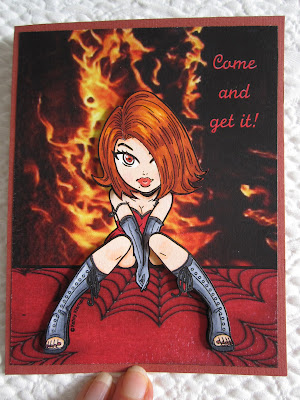 Agent of the Abominable Andrea:

The Freak of the Formidable Fiona:
will reveal her project with Glo on Wednesday.

The Menace of the Monstrous Mark:

Check back on Wednesday for Creepy Glowbugg's and Fiona's
creations and the Gruesome Twosome from last week's challenge.

Posted by Creepy Glowbugg at 6:00 AM