Wretched Wednesday - You're making a scene!

Horrific Hump Day Haunters!!!
Can you feel the crispness in the air yet?
I can't. We're still flirting with the 90's here in California,
but I am getting a bit giddy with all of the Hallowe'en decorations
out in the stores.﻿
A little retail therapy really helped my mojo this week.
I kinda went cwazy on this challenge.
We are challenging you to make a Hallowe'en inspired scene
for this week's Macabre Monday.

We are very fortunate to be sponsored by
Make it Crafty.
We have some great prizes to award to this
week's chosen Gruesome Twosome, so play along!!
Since I am to lazy too make a step card, I decided to really make
a labor intensive project using a thrift store frame, lots of card board,
some MS punches, lots of glitter and Spica pens,
and some awesome MIC digis!! 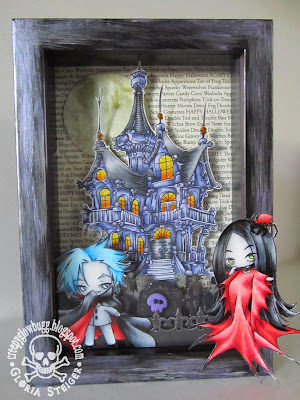 Okay, first I painted the thrift store frame with black, silver, and
purple acrylic paints. I used black as the base coat and then
used a dry brush technique to apply the silver and purple paints.
While that was drying, I colored in the Mini Monztas from MIC
using Copics.  After fussy cutting the images I used a Spica pen to
go around the outside of the images for some Vampiric sparkle. 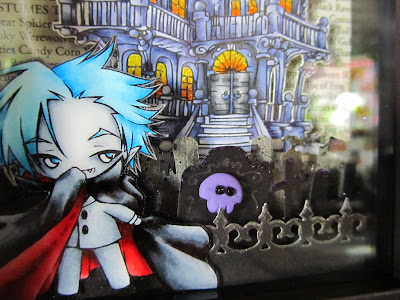 Now let's not forget that Haunted House! That detailed baby was
quite a work out! LOTS of details!!!!
I had to get out the magnifying specs for that one!
I layered in some QuicKutz and Martha Stewart graveyard punches to
give more depth to the scene. I even managed to pop in a teeny tiny
skull on one of the headstones!
I popped everything up on corrugated cardboard in varying thicknesses. 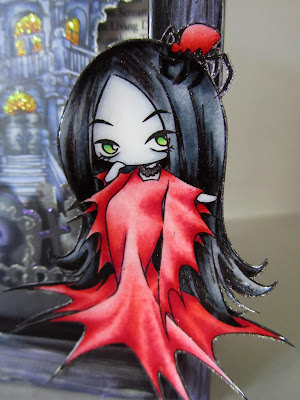 I topped off both of my Vampyres with Glossy Accents.
It makes them a bit more sturdy, especially the little
lady since she is outside of the glass. 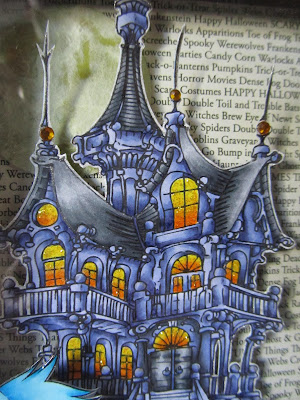 I love this house image!!!
I Stickled the windows to make them sparkle,
and outlined the entire house in Sakura Stardust pen.
I also added some rhinestones. More sparkles!
I think this will make a nice addition to my Hallowe'en
decorations this year.
There is still time to play along with us this week.
If you like these images, they (and others) are up for grabs as this
week's prize schwag. But ya gotta play!
Posted by Creepy Glowbugg at 4:00 AM

This is incredible!! I love alllll the details and I am totally going to have to try the sparkling edge technique!! Fantastic colouring too!!! hugs xo

Fabulous coloring and details! Love it!

This is amazing!! The colors, the details, the sparkle! What a gorgeous project.

Breathtaking, Glo! Your coloring blows me away! This darling scene deserves to be framed. LOVE it! xxD

Oh honey retail therapy is always the best cure actually for anything. Love the haunted house with the glowing windows. And your little creepers are great. I love the blue hair. Absolutely goulish I love it perfect in the frame! The spider on the girls hair is really creepy!
Hugs Bonnie