When I first read the idea of a Salvador Dali inspired
challenge I was very intrigued and immediately began
designing (in my head) my project.
I opted for a mixed media kind of project, using
various Dali images and quotes. 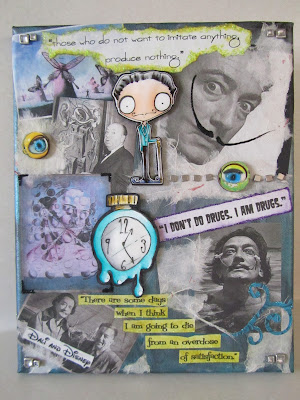 I used an 8" x 10" stretched canvas, painted with metallic
shades of teal, silver, purple, and black. 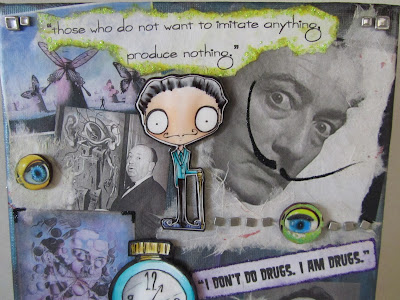 I knew this Dali image from The Octopode Factory would come in handy.
I also found a use for some creepy doll eyes, and destashed a bunch
of brads. 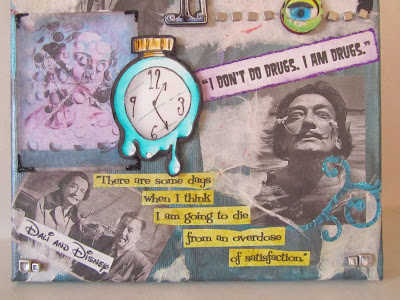 The melting clock is another Octopode image. I used Glossy Accents
to make the watch face shiny and dimensional. I added a
photo of Dali and Walt Disney, a couple of cool quotes and
some decoupaged mulberry paper.
I used more quotes around the outside of the canvas and sealed
everything with polyurethane.
Thanks for stopping by and I hope you were able to glean some
inspiration for your own project.
You have until Sunday at 10 PM CST to enter!
﻿
Posted by Creepy Glowbugg at 11:13 PM

Terrific collage and love that melted clock, that is so Dali. Annette

I LOVE it! Valerie