I'm running a bit behind today.
This week's challenge seems to have stumped
even our most loyal and creative weekly followers.
The challenge is called,
Evil Empire.
You are supposed to choose your favorite Disney
villain and make a project using your chosen
bad guy or gal as your inspiration.
Now that can mean anything from using Maleficent's
color scheme of black and purples, to making your project
with an Arabian flair to show us the evil Jafar.
I chose the absolute scariest Disney villain ever...
Chernabog
(also known as Satan) is the massive nocturnal devil and the main antagonist in Night on Bald Mountain, who holds power over various restless souls. His name is taken from Chernobog, a deity of Slavic mythology; the name is Slavic for "black god". While officially a pagan god, it should also be noted that Chernabog might have originally been intended to be Satan: when "Night on Bald Mountain" appeared on the original Wonderful World of Disney, Walt Disney referred to Chernabog as "Satan himself." Deems Taylor also refers to Chernabog as "Satan" in the film.


I first saw the Chernabog in Fantasia.
I also have a Disney Villains snowglobe with the
ominous Chernabog looming from behind the globe. 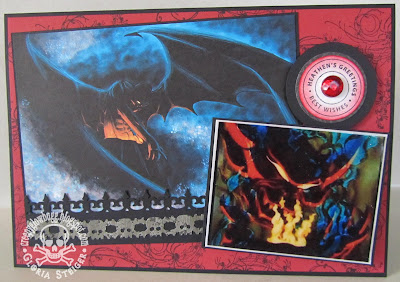 I found two really cool pictures on google and kept it
all pretty simple. Primary colors are not my favorite to work
with, but didn't realize how prominent they were until I was
too far to turn back. 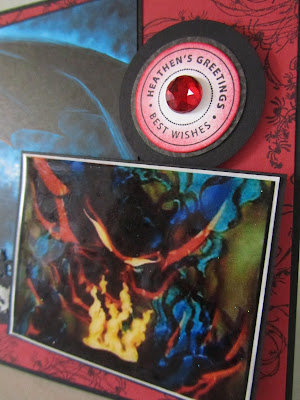 I UTEE'd this image to make it look like a tile,
and I used my favorite sentiment ever, the
"Heathen's Greetings" from Leavenworth Jackson.
There are a ton of awesomely horrendous villains
to choose from in the Disney archives.
Maybe a character who wasn't intended to be a bad guy
is your most detested villain. Show us!!
You have until Sunday at 5PM, CST to join in on
this challenge - if you're up to it.
I mean only the most creative and awesome crafters
may be up to this caliber of creating.
How's that for some chain yanking?
I'll be back tomorrow with the final word
on who are the winners of last week's challenge.
Stay tuned.
Posted by Creepy Glowbugg at 2:54 AM