This week'﻿s Macabre Monday challenge is
Garden of Good and Evil.
I wanted to make a dimensional project out of clay,
but wasn't sure which direction I should go with it.
I have been looking for a frog to zombify for months.
I was inspired by something I read on the Frog Queen's blog,
and thought how cool she would think I was if I made a
zombie frog.
Problem was, I never could find an acceptable ceramic frog
specimen for this project. So, I decided to just make the damned
thing myself! 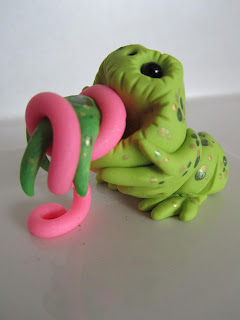 Here is my silly clay version of a zombie frog.
I'm not sure it translates well, but he is eating
a frog hand. That's his tongue wrapped around it. 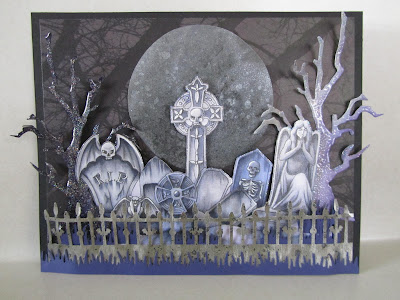 I decided to make a garden background for my
amphibian of the living dead.
I used the awesome graveyard scene from
Delicious Doodles, and colored it with the
BV range of Copics. I added some Tim Holtz trees,
and some MS border punches, and then mounted it onto
black card stock. 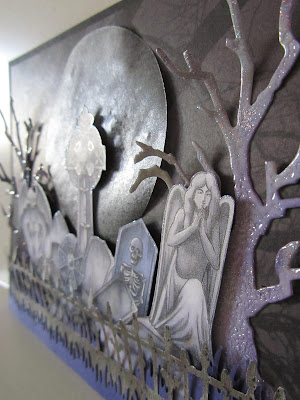 I used vellum and glimmer mists to make the full moon.
I UTEE'd the die cut trees and used some iridescent
embossing powders to make them appear moonlit.
I used a butt load of foam dots to give this piece lots
of dimension. 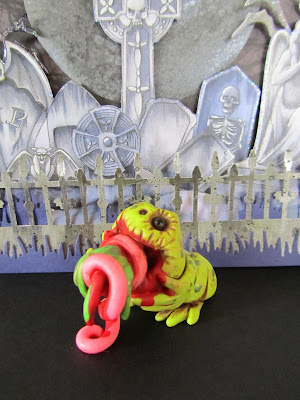 I had to add a nice washing of
brown paint to give the frog some character.
Plus my son insisted on blood. I tried to keep
it on the lighter side, but it's so much fun to
add the blood - it's hard to know when to stop! 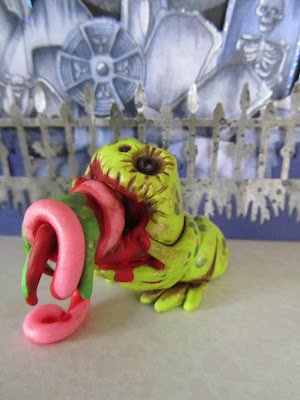 Love it! This is a unique piece and no other ceramic would do :) The background is so cool!

This is freakin' fabulous. You rock.

NICE! "Zombie Frog", I think I may have heard of everything now!

FANTABULOUS zombie frog LoL He is just amazing. Love the background to - lovely creation there - as usual. That froggy just made me laugh so much. He's great !! xxxxxxx

OMG!!!!! He is just too fabulous for words! Great work on his gorgeous digs, too. Love it! xxD